The Chef has seen some new potatoes forming in his plot of a vegetable garden.  The tiny white stems in the soil (stolons) are swelling at the end to form tubers. 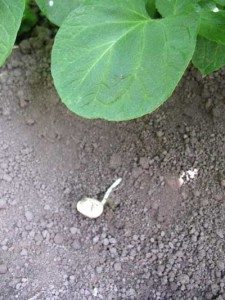 The largest plant in the Maris Bard potato row had a little potato the size of a marble.

The plant next door had a new potato which was as big as a pigeon’s egg.

Click this link to watch TopVeg checking if his potatoes are ready to dig.

Now The Chef has a dilemma!  How soon can he dig them and cook his first new potatoes?  The Chef says he does not want to murder them, but hopes to harvest them in two weeks time.

The Chef is planning a gourmet meal, now that his new potatoes are forming in the Plot!