Cutting seed potatoes is a way to increase the number of potato plants grown from one seed & is used when the seed of a particular variety is scarce or very expensive.

Large seed potatoes may be cut into several pieces, as long as each piece contains at least one eye. The ideal seed potato is the size of a hen’s egg.
The eye of the potato is a leaf scar with a depressed lateral bud. This bud will grow into the shoot, which appears above ground, and also produces the new tubers below ground. When the eye first starts to grow the new shoot is called a chit. 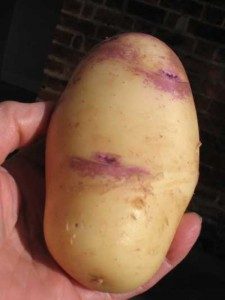 How to Divide, Cut or Split Seed Potatoes: 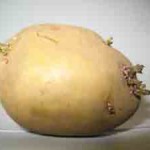 Disadvantages of dividing seed potatoes are:

Cutting seed potatoes is an old technique which has been practised by vegetable gardeners for years.