How to Grow Pumpkins in your Vegetable Garden

How To Grow Pumpkins In Your Vegetable Garden

Pumpkins are great for a number of purposes. They can be used to make a great pie, and of course there’s the traditional Halloween decoration.

Fortunately, growing good ones takes only a modest amount of knowledge and care.

As with any vegetable or fruit, preparing the soil properly is paramount. Use a soil testing kit to make sure the pH is about 6.0, a little more alkaline than many vegetables see as ideal. pH can be adjusted up or down with sulfur or lime. A soil temperature of about 60F/15.5C is best.

Good drainage is important for growing good pumpkins. Too much clay in the earth will retain excess moisture. Soil that is too sandy will lose water. A good sandy loam is best. You can adjust the consistency by adding compost, breaking up clay, adding topsoil and other common methods.

From Seed to Vegetable

Planting in small mounds is a favourite technique. Be sure to leave plenty of space from one plant to the next, though. Pumpkins grow large and they like to have lots of sunshine, water and earth all to their own. From 4-6 feet (1-2 m) apart is best. If you like to plant in rows, keep those 6-8 feet (2-2.5 m) apart. The surrounding ground should not be planted with other vegetables.

Daily watering would be overdoing it for these plants. But when you do water, make it ample. Pumpkins like a good soaking that puts water down deep into the soil. Provided you have soil that drains properly, a drip irrigation system will put plenty down where it needs to go. 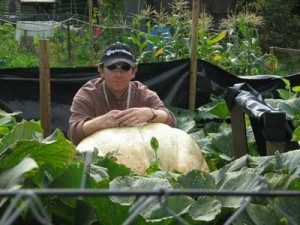 Some Concerns and Remedies

That style of watering will also help avoid some of the common diseases that attack pumpkins, such as downy mildew. It’s caused by the Pseudoperonospora cubensis fungus and growth is encouraged when the temperatures are lower and the leaves are moist. It will appear as yellow spots on the foliage. As the disease progresses it turns brown, then black. Along with proper watering practices, ample space encourages good air flow, which helps to reduce the odds of disease.

Powdery mildew is a similar problem, caused by a different type of fungus. It appears as a white mould on the leaves. Unlike downy mildew, however, this type tends to occur in warmer weather. But it is encouraged by the same bad watering methods. That’s actually good, since one good technique can combat multiple problems. Compost tea is useful for these problems, too.

Unfortunately, fungi aren’t the only enemies of pumpkins. Cucumber beetles are a common pest for this plant. Squash bugs also like pumpkins a little too much. Thick mulch helps minimize their ability to lay eggs.

Many growers will plant ‘trap crops’ to lure the insects to sacrificial plants in order to retain the more valued pumpkins. Companion plants such as catnip, marigolds and mint will help keep the squash bugs at bay, for example. 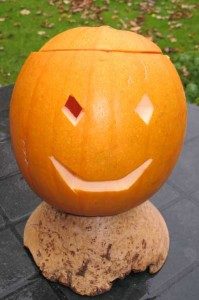 With a little care pumpkins will be ready for harvest in 3-4 months. Then you can carve one up and have pumpkin pie just in time for Halloween.

Thank you Dave Truman for this informative article.