Flowering rhubarb is a common site at this time of year.  If the rhubarb flower is left on the plant,  the root will be weakened & the stalks will be weak and thin. 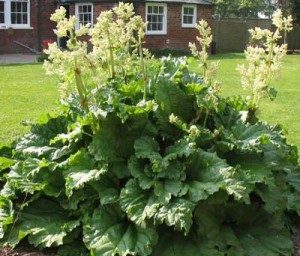 Some people like to see rhubarb  flowers in the garden. 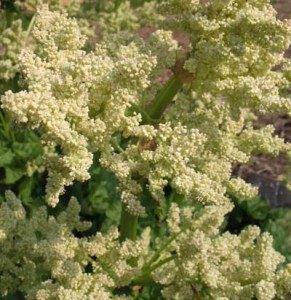 But if you are after rhubarb for the kitchen, the rhubarb flowers should be removed as soon as the flower buds  are seen. 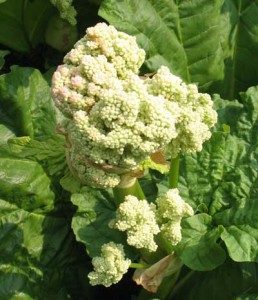 To remove the flower stem:

The tendency to bolting depends on:

To encourage leaf growth and discourage flowering of rhubarb:

* divide the crowns every 4-5 years to keep them young
* water during the harvesting period if in drought conditions
* feed with well rotted manure or fertiliser in early spring and autumn
* do not totally strip the root – always leave 4 or 5 stalks.
* stop pulling stalks after July, to allow the leaves to feed the root
* do not force each crown more than once every two years
* provide an open, sunny site in the vegetable garden

Although flowering rhubarb looks pretty, it is not good for the production of rhubarb to eat.