In spring, unwanted potato plants appear in the vegetable garden.  They can grow from tiny potatoes which were missed last year, or even from parts of damaged potatoes which were left in the ground previously. These potatoes, from the previous year, are called ground keepers. The new potato plants they produce are called volunteers. This is a photo of volunteers appearing in the bean patch. 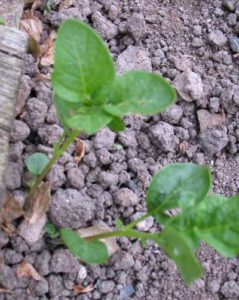 Volunteer potatoes should be treated as weeds, and removed as soon as they are seen. It is tempting to keep them, as it seems a shame to discard a promising-looking, forward plant. This is a photo of one of the volunteers which was in the bean patch growing from a ground keeper:

But it is very bad practice to keep the volunteers, as they allow potato diseases, such as blight, to spread.

Volunteer potatoes act as a ‘green bridge’ for pests and diseases that cannot persist in the absence of the host. Viruses can survive in ground keeper tubers as can potato blight. The presence of volunteer potatoes can maintain a high population of potato eel worms in soil throughout a rotation.

So, treat the volunteers as weeds, they are unwanted potatoes; get rid of them, and keep your garden healthy.