How to Prune Summer Raspberry Canes

When the summer raspberry harvest has come to an end, prune out the old flowering canes at soil level. The new shoots that have grown this year will bear next year’s fruit. Removing the old canes from the raspberry row will prevent the carry over of diseases, and give the new canes light and space.  (This method is for summer fruiting canes, not autumn raspberries.)

* Select the old canes which had fruit this year and cut them out at soil level.

* Choose the two strongest and healthiest new canes on each root to keep in the row. Cut away the weaker canes at soil level & discard.. 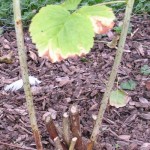 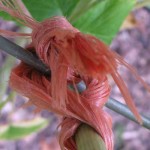 * The raspberry canes are quite pliable at this time of the year and  can be bent and moved into position. The canes become brittle in the spring and snap easily, so it is important to train them into position now.

Pruning the summer raspberry canes as soon as the fruiting season ends, will  encourage a good crop of raspberries in the garden next year.