Today we bought some Maris Bard potato seed.  Maris Bard are a first early, that is a very early potato, and the variety is a TopVeg favourite!  We like the flavour and they keep well in the soil. 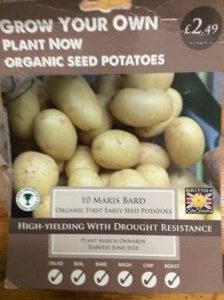 The photo above is  of the label of the packet of seed we bought.  We wanted Maris Bard but the only ones in the shop were organic.  We would not normally pay the extra money required for organic seed. But it is important that the seed is certified, and the certification number is shown on the packet.